On Saturday morning, 11-10-2018 around 10:20am, deputies from the Richland County Sheriff’s Department and Viola Fire & EMS responded to Welker Hollow Road in Forest Township for a report of a hunter hanging from a tree. An unidentified hunter from Milton, Wisconsin was using a climber stand when the stand gave way and the subject was suspended upside down about 5 ft off the ground. He had his safety harness attached, however his leg became caught in the bottom rung of the stand. A neighbor to the property was walking to the woods with his son to put up their stands when the son heard someone yelling for help. The neighbor investigated and found the subject about 30 yards into the woods off Welker Hollow. The victim indicated he had been hanging upside down for approximately 2 hrs. Viola Fire, Viola EMS & Richland County Sheriff’s Deputies freed the victim, who was then flown by Medical Helicopter to Gunderson Hospital in LaCrosse with a reported leg injury and hypothermia.

The incident took place off of Welker Hollow Road in Forest Township.

Richland County Highway Department will be replacing the box culvert on Comar Ln. We will be closing the road to thru traffic on Monday July 2nd at approximately 7:00 AM. Please plan ahead for this and park your vehicles on the south side of the box culvert(Hwy 80 side) if you will be leaving your residence after 7:00 AM. We will have the road opened by 5:00 PM for thru traffic.

Sorry for any inconvenience this may cause.

Bids must be received by Friday, May 25, 2018 at 4:00p.m.   Bids will be accepted by U.S. Mail or hand delivery to the Richland County Sheriff’s Department.

Requests can be made by calling 608-647-8906 or through email to Chief Deputy Chad Kanable at chad.kanable@co.richland.wi.us.

Richland Center Police Chief Lucas Clements would like to pass on a press release from the United States Department of Justice, involving the sentencing of a Richland County resident for conspiring to distribute methamphetamine. Local members from the Richland-Iowa-Grant Drug Task Force assisted several Federal, State, Out-of-State and Local law enforcement agencies during this lengthy investigation.

MADISON, WIS. – Scott C. Blader, United States Attorney for the Western District of Wisconsin, announced that Joel Ringelstetter, 48, Lone Rock, Wis., was sentenced yesterday by U.S. District Judge William M. Conley to one year and one day in prison for knowingly and intentionally possessing methamphetamine with intent to distribute. Ringelstetter pleaded guilty to this charge on November 21, 2017.

During sentencing, Judge Conley described Ringelstetter as a low-level dealer within a larger conspiracy. The larger operation was responsible for numerous pounds of methamphetamine shipped from California to Wisconsin. The amount attributable to Ringelstetter, conservatively, was over 10 ounces of methamphetamine. During a search of his home, law enforcement officers located drug paraphernalia and several firearms.

Ringelstetter and 10 other individuals were charged between four indictments returned by federal grand juries for their roles in this methamphetamine distribution conspiracy. Nine of the 11 individuals charged in the indictments have pleaded guilty; Ringelstetter is the ninth to be sentenced.

Due to the lack of snow cover in parts of Wisconsin, annual burning permits are in place.  Burning permits are free and easy to obtain. They encourage the public to burn safely and are proven to be effective in protecting lives, property and natural resources from the damages of wildfires.  Permits are required to be obtained and signed prior to burning.

Please continue to check the DNR website to check for permit status at:
https://dnr.wi.gov/topic/forestfire/permits.html 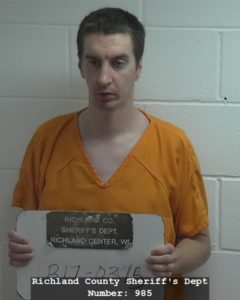 County Officials are reporting road closures in the county due to high water.

The Richland County Sheriff’s Department in conjunction with the Richland County Highway Dept and Richland County Emergency Services is notifying residents of rising water and flooding in the area. Due to the heavy rainfall, some roads in the county are now officially closed until the high water recedes.
These roadways include: Cty D at the intersection with Cty DD; Cty C 2.5 miles west of Hwy 80; and Cty I between the Hwy 80 intersection and the first bridge. Officials are also watching the Rockbridge and Hub City areas as the water continues to rise. County Officials will stay on top of the situation, and remind all travelers to “Turn Around, Don’t Drown”.

The Richland County Sheriff’s Department, under the authority of the Richland County Law Enforcement and Judiciary Committee, is currently accepting bids for the purchase of  one (1) Police Package 2016 Non-Retail Ford Interceptor SUV Police Patrol Vehicle, to be delivered within 90 days of the order being placed.

Bids must be received by Wednesday, March 1, 2017 at 4:00p.m.   Bids will be accepted by U.S. Mail or hand delivery to the Sheriff’s Department.

Detailed bid specifications: Available by contacting  Amber Muckler at 608-647-8906 or through email at amber.muckler@co.richland.wi.us

On behalf of the Richland County Law Enforcement and Judicial Committee

The Richland County Sheriff’s Department, under the authority of the Richland County Law Enforcement and Judiciary Committee, is currently accepting bids for the purchase of one (1) Police Package 2017 Fleet/Non-Retail Chevrolet Caprice Police Patrol Vehicle, 4 door sedan. Unit to be delivered within 90 days of the order being placed.

Bids must be received by Wednesday, November 30, 2016 at 4:00p.m.   Bids will be accepted by U.S. Mail or hand delivery to the Sheriff’s Department.

The Richland County Truancy Committee’s Truancy Policy for the 2015-16 School Year helps clarify important changes in how truancy matters are resolved in the county school districts, with law enforcement and through the juvenile court. County school districts adapt the policy into their individual school handbooks and send this information out at the beginning of the school year. For further questions regarding truancy management, support in reducing truancy concerns before a student is cited, and what juvenile supervision looks like please contact Richland County Health and Human Services, and ask to speak to a Children and Adolescent Services Team Lead Worker.