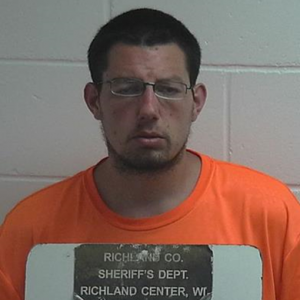 Chief Lucas Clements of the Richland Center Police Department reports that a Richland Center man has been arrested for a drug delivery charge as a result of an investigation into a near fatal overdose that occurred at a residence in Richland Center late last week.

Harrison E. Schwichtenberg, 25, of Richland Center has been arrested and tentatively charged with Delivery of a Schedule IV drug, a Class H Felony.

Chief Clements stated the investigation, which was conducted by officers from the Richland Center Police Department and the Richland-Iowa-Grant Drug Task Force, discovered that the victim had purchased the prescription pills from Schwichtenberg, which ultimately led to the near fatal overdose.

Chief Clements commented that, not only is this case a prime example of the dangers associated with illegal prescription pill distribution and abuse, it is also an example of local law enforcement’s dedication to investigate these cases to the fullest extent.  Chief Clements added that, because of the danger it presents to the community, combating illegal prescription pill diversion has been, and will continue to be, a priority of the Richland Center Police Department and Richland-Iowa-Grant Drug Task Force.

At the time of Schwichtenberg’s arrest he was out on bond for a previous arrest for manufacture/delivery of non-narcotics and possession of a controlled substance. As a result, Schwichtenberg may also potentially be facing various bail jumping charges.  This case has been referred to the Richland County District Attorney’s Office for formal charges to be filed.

Chief Clements advised that citizen assistance is paramount in combating the distribution of drugs within our community.  Anyone witnessing suspected drug activity in the city is encouraged to contact the Richland Center Police Department at 608-647-2103 or Richland County Crime Stoppers at 647-CLUE (2583), where callers may remain anonymous and could be eligible for a cash reward.