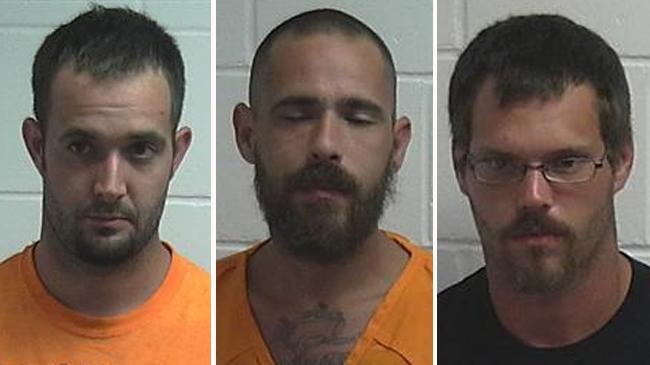 On September 12, 2015 at approximately 12:20 AM a Richland County Sheriff’s Deputy observed a white Corvette traveling west bound on State Hwy 171 at a high rate of speed without any headlights, near the village of Boaz. The Deputy attempted to make a traffic stop on the vehicle and the driver fled, continuing south bound on County Hwy E, and eventually turning west onto Hill Road. Two Deputies pursued the vehicle on Hill Road until the driver lost control and traveled off the roadway into a field. The driver was then taken into custody and identified as Derek Nehls of Lone Rock. Nehls was arrested for operating while under the influence 2nd offense and felony fleeing an Officer. After an investigation, it was found that Nehls was just involved in a burglary and had stolen the Corvette from a shed on Tuckaway Valley Road. The investigation continued and two males identified as Jason Weiland and Anthony Dubson were also arrested for being involved in the burglary. Deputies investigating the case found out that a truck and trailer were also used to take items from the location of the burglary. The truck used in the crime was recovered the following day in the Village of Spring Green. The trailer used in the crime and the stolen property from the burglary were later located on a property on Patch Hill Dr near Viola. While Deputies were placing the truck and trailer into the Sheriff’s Department impound, it was discovered that the truck was stolen out of the State of Iowa and the trailer was stolen from the City of Viroqua. While performing a search of the truck, crystal methamphetamine was discovered inside. The Richland County Sheriff’s Department is working with several surrounding agencies, and at this time the investigation is still ongoing. More arrests are expected to be made from this investigation.

Operating vehicle without owner’s consent, Fleeing an Officer, Operating while under the influence, Burglary, Damage to property, Theft, Trespassing, Breaking and entering, Obstructing or resisting an Officer, Possession of Methamphetamine, possession of stolen property, as well as several counts of bail jumping.