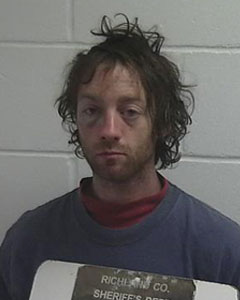 On Monday, January 9th, at 5:37am Richland County 911 received a call of a disturbance at D&Z’s One Stop in the Village of Lone Rock.  When Deputies arrived they discovered a male subject being held on the ground by two males and the clerk had been injured.  According to authorities, John P. Overshiner III of Fitchburg entered the store at around 5:37am and was reported as seeming “out of his head”.  Only the clerk and two delivery drivers were in the store at the time.  Overshiner ran behind the counter and physically grabbed the clerk on duty, identified as Melodie Wells of Lone Rock.  Overshiner wrestled her to the ground, causing minor injuries.  The two delivery drivers grabbed Overshiner and removed him from the clerk, holding him on the ground until deputies arrived.  Overshiner resisted deputies, breaking a body camera while struggling before he was taken into custody.  Melodie Wells was checked at the Richland hospital for minor injuries.  Lone Rock EMS assisted at the scene.  At this time the investigation continues.