The Partners for Prevention Coalition of Richland County is offering free naloxone (Narcan) training sessions for those interested in learning how to administer the medication properly. “Learn how to use the medication and what to do if you suspect someone is overdosing,” said Detective Jason Pilla of the Richland Center Police Department.

The easy 45-minute training will be held at three different times on Thursday, May 7th, at 10 am 1 pm and 5:30 pm.   Participants may attend the training with or without using their video. To log on to the Virtual Training, visit the following Facebook pages-Partners for Prevention of Richland County, Richland Center Police Department and Richland County Sheriff’s Department on the day and time of the session you wish to join. Each participant will receive a box of Narcan upon completion of the training.

The Partners for Prevention Coalition’s mission statement is to engage Richland County residents to prevent substance use by creating safe and healthy communities.  The coalition is part of the Richland County Children and Family Advocacy Council, a local non-profit organization dedicated to preventing childhood trauma and substance use.  Federal and state funding is being provided to support the training.  For more information, visit the Partners for Prevention Facebook page or call Betsy Roesler, Project Coordinator, at 647-6131.

On Friday 4/3/2020 Richland County Dispatch received a 911 call of a 2 vehicle crash on US Hwy 14 near Hwy 58. Sheriff’s Deputies, Richland EMS, Richland Fire and the RC Police Dept responded. According to the Sheriff’s Dept, a 1994 Oldsmobile Cutlass operated by Daisha R. Sass, 20 of Richland Center, was westbound on Hwy 14 when it slowed due to cattle that had been on the roadway and were making their way to the ditch. Another westbound vehicle, a 2007 Dodge Dakota pick up operated by Joseph Durst of Lone Rock failed to notice the Sass vehicle had slowed. The truck struck the car in the rear causing extensive damage to both vehicles. One person suffered minor injuries but was not transported by EMS. Richland Center Fire assisted law enforcement at the scene with fuel clean up and traffic control. The incident remains under investigation.

On Monday evening at 7:18pm the Richland County Dispatch Center received a call of a 1 vehicle crash on Cty Hwy B just east of Penny Lane. Richland County Sheriff’s Deputies, Lone Rock Fire & EMS as well as Ithaca 1st Responders were all sent to the scene. According to Deputies, a 2004 GMC pick up truck operated by 36 year old Kevin P. Schmitz of rural Spring Green was eastbound on Hwy B when the truck left the roadway on the south shoulder and struck a driveway. The truck became air born and landed in the ditch. Kevin Schmitz was injured and transported by Lone Rock EMS to the Richland Hospital for minor injuries. Investigators determined alcohol was a contributing factor in the crash and Schmitz was arrested for Operating While under the Influence, 1st Offense.

Looking for some more information about COVID-19 fraud? The United States Department of Justice set up a new website to consolidate information: https://www.justice.gov/coronavirus

Be aware that criminals are attempting to exploit COVID-19 worldwide through a variety of scams. There have been reports of:

Criminals will likely continue to use new methods to exploit COVID-19 worldwide.

If you think you are a victim of a scam or attempted fraud involving COVID-19, you can report it without leaving your home through a number of platforms. 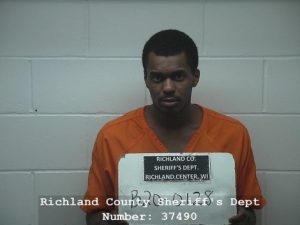 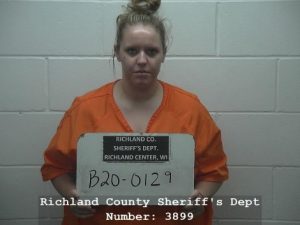 Chief Jones stated that on 3-29-2020, Officers from the Richland Center Police Department, with the assistance of the Richland-Iowa-Grant Drug Task Force and the Richland County Special Response Team, executed a Search Warrant at an apartment in the City of Richland Center. During the search of the apartment, heroin, Suboxone, various items of drug paraphernalia, and a small amount of methamphetamine were located. As a result of the subsequent investigation the following people were taken into custody:

Harry J. Hale, 26, and Rebecca L. Dailey, 25, were arrested on the tentative charges of Possession of Methamphetamine, Possession of Narcotic Drugs, Possession of a Controlled Substance, and Possession of Drug Paraphernalia. The case has been forwarded to the Richland County District Attorney’s Office for prosecution.

Chief Jones stated that highly addictive substances, such as Heroin and Methamphetamine, continues to be a focus of the Drug Task Force as it has continued to be an increasing problem in the area, which has seen an increase in narcotic overdoses, some even resulting in death. Chief Jones added that narcotic and methamphetamine distribution and/or usage has also been shown to be a major contributing factor to numerous other crimes against persons and property.

Chief Jones would like to remind citizens to report any suspicious activity by notifying law enforcement. Callers who wish to remain anonymous can call Richland Area Crime Stoppers at 647-2583 and may be eligible for a cash reward.

Local and National Resources for Farmers:

Harvest of Hope: provides emergency funding (up to $1,500) to farmers. Information and application at:

I am healthy and want to help my community. What do I need to know to keep myself and others safe and healthy while doing helping work? Helping work might mean taking groceries or medications to neighbors who can’t leave their homes, working at a local pantry, or even starting an art-making campaign for nursing home residents outside their building.

Mutual Aid groups are platforms for communities to identify what people need and figure out ways to get them what they need, a way of crowd-sourcing solutions in difficult times. Learn more about how to set up your own Mutual Aid group in your community:

The Richland County Sheriff’s Department is investigating a report of a person impersonating an officer.

The incident occurred on Tuesday evening in Rockbridge Township on St Hwy 80. A male in a black passenger car with a spot light and red and blue emergency lights, pulled over a vehicle and approached it. The male was wearing a brown uniform. The uniform did not have a name or a badge on it. The male asked the citizen if they had a permit to be out driving. When the answer was no the male got back into his car and left.

As part of the investigation, authorities have obtained information that a male in a black Chevrolet Impala with a spot light on it and red and blue warning lights matching the same description did the same thing in southern Grant County and also in Iowa County as recent as yesterday.

The male is described to be in his mid 30’s with short brown hair. He does not have facial hair.

Sheriff Bindl reminds residents that local Law Enforcement wear a name tag and a badge as part of their uniform every day. If something doesn’t feel right, call 911 and try to give as much information as you can for law enforcement.

If anyone has more information, please contact the Sheriff’s Department at 608-647-2106.

What does this mean?

How will I know when I get a burn permit and/or burn debris again?

Why is this being done?

Are public services still being provided?

What if I have a special situation/need?

The Richland County Sheriff’s Department, under the authority of the Richland County Law Enforcement and Judiciary Committee, is currently accepting bids as described below to purchase four (4) police package squad vehicles and one (1) mini van:

Bids must be received by Friday, March 6th, 2020 at 4:00p.m.   Bids will be accepted by U.S. Mail, email or hand delivery to the Richland County Sheriff’s Department. Electronic bids should be sent to amber.muckler@co.richland.wi.us and put Squad Bids in the subject line.

Sheriff Jim Bindl of the Richland County Sheriff’s Department reports that, on 1-17-20, Agents from the Alcohol Tobacco Enforcement division of the Wisconsin Department of Revenue (DOR) requested assistance of local law enforcement while inspections were conducted at the four taverns in the village of Cazenovia.  As law enforcement entered Rumor’s tavern, a “protective sweep” of the establishment was performed to determine who may be present.  During the protective sweep a male subject who had an active felony arrest warrant was located.

Joseph M. Lobsinger, 33 of Cazenovia, was taken into custody for the felony warrant without incident.  During that arrest, Lobsinger made reference to a firearm being nearby. A loaded, but cased, rifle was then found within close proximity to Lobsinger.  Lobsinger was subsequently arrested for Felon in Possession of a Firearm.  In addition to the open felony case in Sauk County for which the arrest warrant had been issued,  Lobsinger was also out of custody on three open felony cases in Juneau County and one in Richland County.  Therefore, Lobsinger was also arrested on both Felony and Misdemeanor Bail Jumping charges.

Also during the protective sweep of Rumor’s tavern, drug paraphernalia associated with the consumption of methamphetamine was observed in plain view by law enforcement.  The Richland County District Attorney’s Office was contacted and a Search Warrant for the establishment was obtained.

During the subsequent search of Rumors tavern, various items associated with drug use and distribution were located and seized as evidence.  The Rumor’s tavern manager, Carla Zimmerman, was not present during the search and would not provide law enforcement with her location.  However, based on the contraband located during the execution of the Search Warrant, once located, Zimmerman, 54 of Cazenovia, is to be arrested on the tentative charges of Possession of Methamphetamine with Intent to Deliver, Possession of Marijuana with Intent to Deliver, Possession of Drug Paraphernalia, and Maintaining a Drug Trafficking Place.

Sheriff Bindl states that local and State agencies consistently work together to combat those involved in the use/distribution of controlled substances and the criminal activity often associated with it, and that this investigation was a great example of that cooperation.  Sheriff Bindl added that the public also plays a critical role in assisting law enforcement with this effort.