Lt. Billy Jones of the Richland Center Police Department reports that a Wisconsin Dells man was recently arrested for his 12th offense of Operating a Motor Vehicle While Intoxicated. 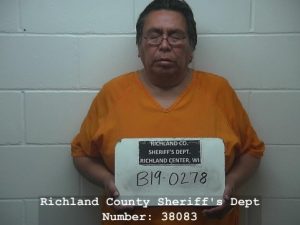 Taylor P. White Eagle, 56, was arrested and tentatively charged with Operating a Motor Vehicle While Intoxicated after being investigated for strange driving behavior that had been called in by a concerned citizen. A subsequent check of White Eagle’s driving record found 11 prior convictions for Operating While Intoxicated.

Lt. Jones stated that the investigation began after the Richland Center Police Department received a call from a concerned citizen about the driving behavior being displayed by White Eagle and also regarding a passenger in the vehicle who appeared to be unconscious.  Upon contact with White Eagle, Officers could detect the odor of intoxicating beverages on White Eagle’s breath and observed White Eagle to display other signs of impairment.  After standardized field sobriety tests with White Eagle confirmed that he was impaired, he was placed under arrest.  During this time Richland County EMS was summoned to assess the passenger for unrelated medical issues.   As White Eagle was processed after his arrest, a search warrant was obtained for an evidentiary blood draw due to White Eagle’s refusal to cooperate with the procedure.

White Eagle remains in custody at the Richland County Jail, being held on a $25,000 cash bond.

Lt Jones stated this incident is a great example of how citizens can assist law enforcement in ensuring the safety of the public by reporting suspicious activity.  Lt. Jones would like to encourage citizens to continue report any suspicious activity by notifying law enforcement. Callers who wish to remain anonymous can call Richland Area Crime Stoppers at 647-2583 and may be eligible for a cash reward.