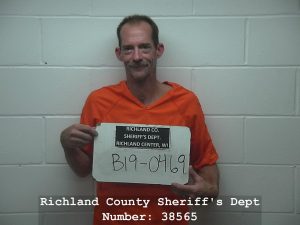 Lt. Billy Jones reports that a Jefferson, Wisconsin, man was taken into custody after a report of a man with a gun and a home invasion which was followed by a brief chase on Wednesday afternoon.

Shane P. Harsha, 49 years old, was arrested on tentative charges of Fleeing and Eluding an Officer, Armed with a Firearm While Intoxicated, Criminal Trespass, and Second Degree Recklessly Endangering Safety. Shane Harsha was also cited for Operating While Intoxicated First Offense, Operating Without a Valid Motorcycle Endorsement, and Failure to Stop at a Stop Sign.

Lt. Jones stated that the investigation began with the report of a male subject pointing a handgun at another person who was backing out of their driveway in their vehicle in the City of Richland Center. The driver of the vehicle informed police that he thought he was being “carjacked”.

After a brief search, the motorcycle and suspect were located by responding Richland Center Police Department Officers and Richland County Sheriff’s Department Deputies. Once located, the suspect and motorcycle attempted to elude law enforcement through the north end of the City of Richland Center at excessive speeds. When the pursuit concluded, the operator was identified as Shane P. Harsha who was found to be in possession of a handgun. Ultimately Shane Harsha was taken into custody without further incident.

Lt. Billy Jones commented that the timely call from citizens, coupled with the rapid response of the officers and deputies involved, led to the quick and safe apprehension of Shane Harsha.